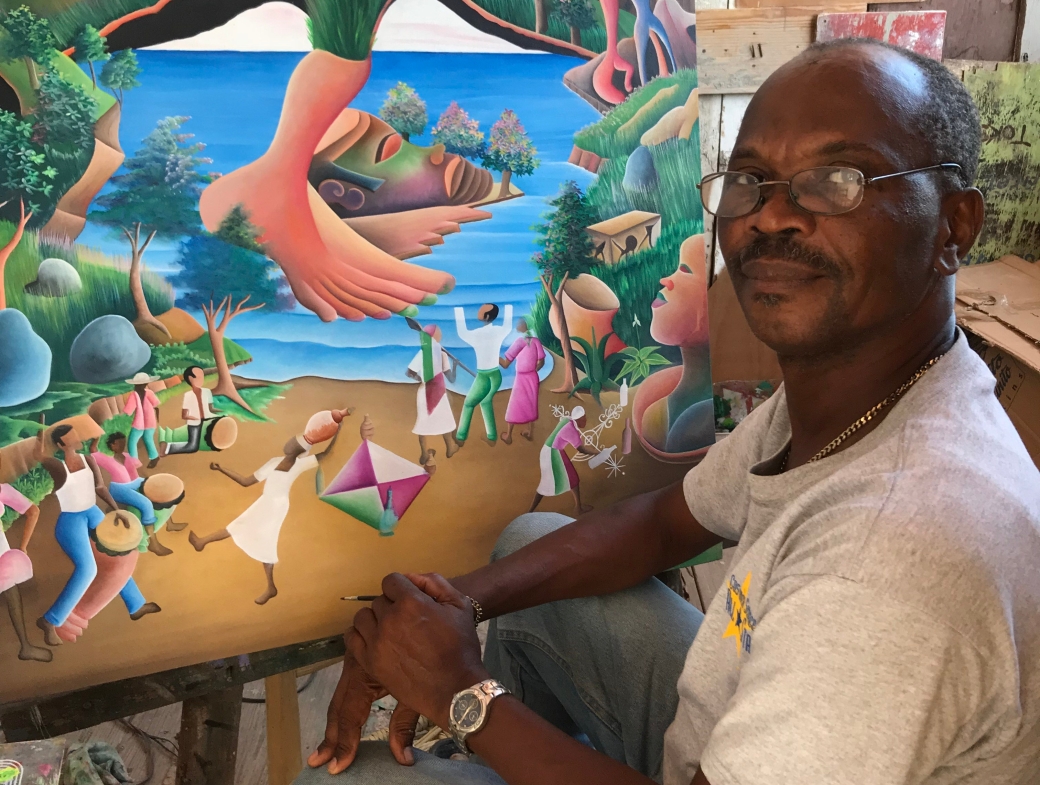 On January 2nd, 1958, Jean Marie Eduoard Vital was born into Jacmel’s most famous family of artists. His father was Pauleus Vital and his uncle was Prefet Duffaut, both of whom were involved in the early movements to define the iconic styles of art coming from the region. As the proud bearer of the family’s artistic legacy to this day, Vital believes passionately in keeping the identity of Jacmel arts alive. His father taught him how to paint when he was young, but he didn’t pursue painting professionally until after his father’s death in 1984. He was the only one of his siblings that had the talent and interest to carry on the tradition. He is the father of four adult children himself and is dedicated to charting a path for the arts to keep holding on to their importance in the region far into the future. 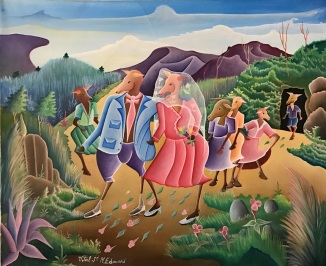 In his own art he continues to work in a similar style to his father which imagines animals and nature in whimsical surrealist scenes that come alive before the viewer. He paints environments where hierarchies between the human, animal, natural, and spiritual worlds are all broken down and the realm of what is possible is expanded. At first glance, many of his paintings may resemble idealistic Haitian style landscapes, but on closer inspection the viewer always finds unexpected characters and ways that the land transforms to make you question what you see. Vital also likes to draw upon his culture’s traditions of voudun that influence daily lives in Haiti. By introducing the presence of spirits and supernatural creatures he further challenges the viewer to reinterpret the world around them that they live in.

Vital acknowledges all of the challenges that face artists in Haiti but never gives up hope. He says that if the politicians, local leaders, and institutions in his country would realize the value of the arts and provide better support, the artists would be equipped to really build a better society. They lack the tools and the access to resources necessary, but they don’t lack the passion or ideas. Despite this, Vitale says, “Even when things are hard, we can’t get discouraged. When life gets tough, that when we have to take the only tool we have, our paintbrushes, pick them up, and paint our way out of our problems. Art is the only thing powerful enough and pure enough to save us.”

He holds on to this hopeful vision of arts in Haiti as he serves as a mentor and leader for all of our students and younger artists in Jacmel who are just starting out in their careers. It might seem like a waste of time for young creatives to decide to pursue the arts during difficult times such as what Haiti is enduring currently, but with experienced artists like Vital providing guidance, there are a lot of reasons to remain optimistic. Vitale also serves as a consistent ambassador for Jacmel arts through his travels and international exhibition of his works. He has been honored to show works in the United States, Guadeloupe, the Dominican Republic, and Venezuela. He continues to encourage people to visit Haiti and invest in tourism here. Whether he’s traveling and promoting Haitian arts in other countries, or advising young Jacmeliens locally, Vital’s message remains the same. “Don’t be afraid of Haiti. There is hope in the Art.”

Visit our "Get Involved" Page today to make a donation to support the advancement of the arts in Jacmel!
%d bloggers like this: